I was born and raised in Elkhart, Indiana, a small industrial town in the extreme northern part of the state, most notable for its’ manufacture of mobile homes/RVs and band instruments. My father ran a small, three pump gas station there for nearly 40 years, so I came to automobiles at an early age. I was trained as an auto mechanic in high school and apprenticed to the local Ford garage during my senior year. After graduation, I went to work at Whitehall Laboratories, maker of Anacin and Dristan products, in the machine maintenance division, in order to better support what at that time was my life’s great passion: building and racing cars on short tracks and dragstrips throughout the state.

As the Draft approached my age group, I learned that it was possible to obtain a lengthy deferment by applying for Aviation Cadets through the local Air Force recruiter. I did that and began the lengthy testing process while building my last hot rod, a ’35 ford coupe into which I had shoehorned a ’57 Lincoln engine with all the bells and whistles- a real Corvette killer. After passing all the Aviation Cadet testing, I was sent for a physical at Chanute AFB, Illinois- my first time ever on a military installation- where I was told I didn’t have enough teeth to qualify for flying training. I had worn dentures since I was 20 years old. Now I was a year older than the oldest guy being drafted and my deferment was gone. I immediately enlisted in the Air Force, and turned 22 years of age during Basic Training- by far, the old man of the group. 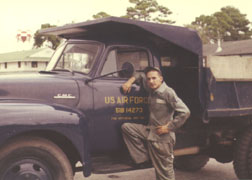 Having a prior trade, I bypassed tech school and was sent to Keesler AFB, Mississippi, as a qualified auto mechanic. The most notable events of my enlisted service were getting married to a girl from my home town, Sharon Miller, being named Airman of the Month for Oct., 1960, and being selected to attend OCS- the last two events were considered highly unusual in the automotive maintenance career field at the time. My Sergeant still maintains I had a “fix” in with the judges because I had a Colonel’s personal vehicle torn down for overhaul at the time of selection. His car, a 1937 Buick, was the pride of the installation when it was finished.

As is true for all my OCS classmates, my six months there was a life changing experience. Not the least of which was, as a captive passenger in a drunken upper classman’s car, while returning from the OClub, I got a 70 mile an hour tour of the “bomb run” which ended in a crash in the parking lot that destroyed both the car I was in and Youst’s personal vehicle which was parked there. On a higher note, after graduation, as a commissioned officer, I was afforded the opportunity to take on challenges far removed from the “grease pit”– including working with some of the sharpest individuals in America, helping to develop new and advanced weapons systems, commanding large numbers of men and women, and guiding the daily alert status of America’s ICBM force. OCS opened the door to an entirely new life for me.

After graduation, Blanchard, Booth, Chambers and I went to aircraft maintenance training at Chanute AFB. Booth and I often played chess in the evening hours, much to his chagrin at having to play chess with an auto mechanic. I would never see Walt Booth again, as he was later killed in action in Vietnam.

My next assignment, in 1962, was to the 11th Bomb Wing, Altus, Oklahoma, as an aircraft maintenance officer on the flight line, PE docks and in maintenance control.

By 1964, the Air Force was just getting ICBMs in quantity, and there was a sudden need for ICBM maintenance officers. I was retrained in that speciality and reassigned to the 44th Strategic Missile Wing at Ellsworth AFB, South Dakota. I was promoted to Captain during this tour, and spent seven years there as a targeting officer, OIC of field maintenance, organizational maintenance, field supervision, DCM Training, and finally as the first company grade maintenance supervisor of a strategic missile wing in the USAF, normally a Lt. Colonel billet. I also attended SOS in residence during this tour, class of 66-A. My wife, by that time having seen enough of me, South Dakota, and the Air Force, pulled up stakes while I was in SOS, and we were divorced that same year. We had no children.

In 1971, I did a year in Vietnam, again an aircraft maintenance officer, with the 360th TEWS, trying to keep 30 EC-47s and two B-57s in service. The bone yard in Davis Monthan was our major source of supply, and we learned to hang engines in the jungle using an Army wrecker and home-made maintenance stands- quite a learning experience. I was promoted to Major during this tour. 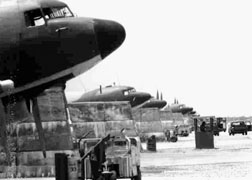 On my return from Vietnam, I attended the Command and Staff College in residence, class of ’73, then went to SAC Headquarters from ’73 to ’76 as a missile maintenance staff officer. Because we had a number of in-flight explosions of the Minuteman ICBM on the test range during this period, I spent a lot of time at the various civilian manufacturing facilities and at Vandenberg AFB, California, the home of SACs ICBM test range, investigating failure modes of rocket motors. I think this experience, probably more than any other, led to my next assignment as missile maintenance staff officer at Headquarters, USAF, the Pentagon.

My first command, in 1980, was the 90th OMMS, at F.E. Warren AFB, Wyoming. That squadron had the responsibility for first reaction maintenance on 200 Minuteman III missiles. We also had responsibility for Base Flight activities located at the Cheyenne, Wyo, civilian airport. As the Division Commander had to fly his turn on the Looking Glass aircraft out of Offutt AFB , his T-39 shuttle to and from Offutt was our most regular customer. When the 0-6 list was about to come out, the DCM informed me that there was only one 0-6 billet in the Directorate of Maintenance, and he would be damned if he was going to leave! Well, I was fortunate enough to make the list and was immediately transferred out. 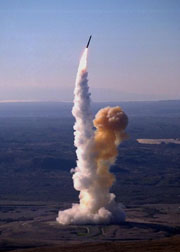 My next command, from 1981 to 1983, was the 394th ICBM TMS at Vandenberg. The responsibilities of the 394th included maintaining launch facilities and launch control facilities for the SAC ICBM test program, installation of the command destruct packages on test missiles, refurbishing the silos after firing, and EOD support for the Southern California area. We were also charged with support of the various missile wing maintenance teams involved in the test program.

The Thor IRBM unit was still a part of the 394th when I arrived and was deactivated under my command. I pinned on my eagles, which were presented by Congressman Lagomarsino, during this assignment.

My last tour of duty was back at SAC Headquarters, now as Director of ICBM Maintenance, from 1983 to 1986. My responsibilities there included maintaining the day to day alert status of America’s ICBM force of 1000 land based missiles, and planning for and implementing 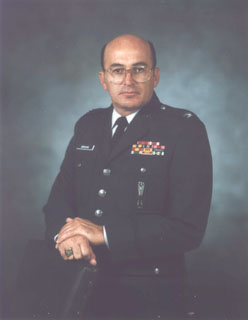 modifications and life extension programs for the ballistic missile fleet. We also began deactivation of the Titan II systems, completed deactivation of the Minuteman II systems and began deployment of the Peacekeeper systems during this period. I retired at Sac Headquarters on 1 Sept 1986, in the grade of Colonel, completing 26 years, 8 months and 25 days of active duty service. My major decorations include: Vietnam Campaign Medal, Vietnam Cross of Gallantry Medal with Palm Device, Vietnam Service Medal, Air Force Commendation Medal, Meritorious Service Medal with 2 OLC, Bronze Star, and Legion of Merit.

After retirement I went to work at Aerojet Propulsion, a rocket motor contractor, as an Engineering Specialist and Manager of Reliability and Maintainability. When the Soviet Union collapsed, our government began cancelling ICBM contracts with a vengeance. Having been with the company just over five years, and being just over 55 years old, I was given the opportunity to take early retirement. I 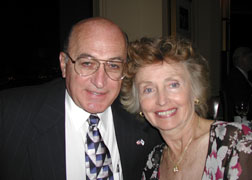 had met my old high school sweetheart, Ardie Young, at a class reunion a few years earlier, and we both took early retirements in 1992. We now reside in Orangevale, California, happily living the good life!